Two Steps Forward, One Step Back

June has been quite a month, featuring some amazing rides, and then another serious crash. Here’s an update.

With Memorial Day coming early, this year I had an extra week between my big May ride (Tour d’Essex County) and my big June ride (Outriders). With beautiful weather on tap, on Monday June 2 I decided to throw down another solo century, just for fun. It would be my third century of the year. 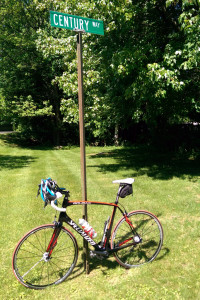 While deciding on a route, I came across a century I did five years ago with the Quad crew, which went up to Dunstable and back, skirting a couple lakes.

Although I’d forgotten much of it, it turned out to be a beautiful route, which I extended a couple more miles up into New Hampshire (both in order to cross the state line as well as to visit Nashua’s appropriately-named side street called “Century Way”). Going through Chelmsford I briefly rode alongside an adult fox, and on the return leg I stopped at Kimball’s for ice cream.

Physically, my body wasn’t quite up for the challenge, as evinced by periods of serious pain in my right shoulder, left knee, and both hands. But having stressed my body, I expected it to adapt to be able to better handle the demands the next time.

“The next time” came two weeks later, when I undertook one of my favorite rides: the Outriders double-metric century (127 miles), which starts a few blocks from my house in Boston and goes out Cape Cod to finish in Provincetown. Thus my fourth ride of the year in excess of 100 miles.

The weather was absolutely perfect, and I paced myself in order to have enough strength for this perennial longest event of my cycling year. As a result, I spent time chatting with several other riders, and still finished 12th out of 125 starters. And that left me with five hours to enjoy in Provincetown before my 8:30pm ferry back to Boston. It really was a stellar day.

While the ride out was awesome, the trip back was a litany of troubles. The scheduled ferry broke down, and the replacement arrived an hour late for our departure. Then when we were halfway home, the new ferry shuddered to a violent halt when it got snagged in a line of lobster pots off Scituate, which took about 20 more minutes to extricate ourselves from.

By the time we’d docked and I’d put my lights on my bike, it was nearly midnight. I’d already been awake for 20 straight hours!

On the two-mile ride back to my condo, something happened. I’m not gonna go into the details of what or where, since my head injury prevented me from remembering much about the event. I’m pretty sure it was a solo fall from hitting something I should have seen. Although there are additional odd pieces of the puzzle.

What I do know is that I came to, completely disoriented, but knew it. I had someone summon EMTs and went to the hospital, where I was diagnosed with a concussion, cat scanned, and (after several hours during which my mental state gradually improved) released. I had some abrasions on my hand and foot, but the head injury was the most concerning. Well, except for the huge bruise I later developed from the nurse’s botched attempt to insert an IV port in my arm…

The bike initially looked kind of banged up. I’d popped both tires, bent one brake lever, and the front wheel was dented and out of true. Fortunately, it looks like the latter may be the only thing that needs replacement, and that should be covered by the extended warranty I bought on my wheelset.

The only thing I really need to spend money on—and the most impressive bit of damage—was my helmet, which was scraped up, dented, and cracked through in four places. While I have very little faith in bike helmets, I can say that I’m very thankful that my naked skull didn’t take the beating the casque did. I’m pretty certain it saved me from a crippling injury.

By the time I walked my broken bike home from the hospital, it was 3:30am. I’d been awake for 23 hours and 45 minutes. One hell of a long day!

That was last weekend. Most of the symptoms of my concussion have abated, although I’m still being very careful about it. My arm—which was fine until they tried to stick an IV into it—remains livid, very sore, and difficult to bend. The bike’s in the shop, and I hope to have news from them shortly. And a new helmet has been ordered.

You might be wondering what this means for my planned rides: surprisingly little. I had been debating doing an unsupported CRW ride that repeated the 130-mile Outriders route the following weekend, but the ferry problems had already convinced me to forego that. I usually do a solo century over the Fourth of July holiday, and that should still happen if my arm permits, although possibly on my old bike. My next organized group ride isn’t until July 20th—the Mount Washington Century—and I expect to be back in form well before that. Then comes PMC.

So overall, the crash won’t put too big a dent in my training goals. Mostly, it’ll hit my wallet in the form of medical bills.

But the thing that bothers me most about the whole episode is this: cycling entails risks you can control and others which you cannot, and I’m discouraged to think that this accident might have been something entirely within my control to avoid.