When it rains, buy new toys

Please come to Boston for the springtime? Not bluddy likely!

Back on April 13th I said that spring was late in coming, but that cycling season had finally begun. I was wrong. Basically, that was the only nice day we've had all year.

It's currently May 21th, and it's 52 degrees and overcast, which is as good as it's been for a long time. We just finished Bay State Bike Week, and it has been rainy and cold for more than a month. Needless to say, the 2011 cycling season has pretty much been a washout so far.

The first major ride of the year—the CRW Spring Century—was supposedly held last Sunday. With rain on the forecast, I opted to forego even registering for it.

However, since Saturday was only a cold and misty day, I decided I'd extend my usual weekend Quad ride to a full century. Jay accompanied me as we did the regular "Quad long" ride, then did the full Curve Street and Strawberry Hill routes backwards, then I did the Mystic Valley Parkway. By the end, I was completely used up, but then that was the whole point, knowing that I wasn't going to be able to ride for another 40 days and 40 nights. Overall, I'm glad I did it, even if it was cold, overcast, painful, and only my 5th ride of the year that was greater than 30 miles. GPS log here. 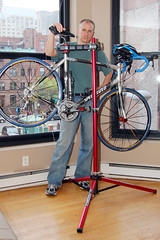 And that's all she wrote in terms of riding news. The rest is mostly retail therapy...

The two highlights of which are a workstand and a vest. The vest is just this mesh carrier for... Well, I guess it's easiest just to show you. This is what I'm talking about. It's kinda like a four-foot blinking glow-stick, which should prove useful for bike commuting. Not exactly stylin', but quite functional.

The workstand, on the other hand, is très cool. It's been on my wish list for three or four years, and I finally had the disposable income to make it possible. The thing's actually pretty gigrontic, and should come in very handy. Very nice!

Circling back on a couple previous purchases... The Giro Ionos helmet is nice, but I'm still figuring out whether they'll work as a sunglasses holder: an important function for helmets. I love Craft shorts in general, but the new bib shorts are made of compression fabric and thus are a little tight and uncomfortable. I picked up some Lithion 2 tires, which don't have the center blue stripe that the old Lithions had, but they also don't have the flat spot in the center, so they will probably wear better. And I continue to like my Garmin Edge 800, although I've only just figured out how to do laps/splits, and have yet to try following a route/course. 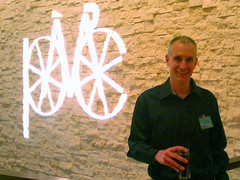 Lowering my stem doesn't seem to have had any major negative effects. The 100-mile ride was a good test, and I was okay, although I did have some lingering neck pain afterward. It's not clear whether that was a result of lack of saddle time or the change in position, tho.

One event of note was last week's PMC Heavy Hitter banquet. Although I've been a Heavy Hitter for the past five years, this was the first reception I've attended, since they're usually dress-up affairs featuring hours of standing around doing nothing. The speakers were, of course, inspirational, and that was a good experience to have now, just as fundraising season begins.

And in theory I should be on the verge of starting my fundraising campaign, although I've yet to compose this year's dunning letter, and I'm easily a month behind schedule on the fundraising video I'd like to do. The interminable foul weather has complicated that enterprise, as well.

And you've surely seen the series of PMC tips I've been posting. So far the feedback has been positive, and I hope to gather a bit more attention when the series is finally completed and available for others to peruse.

I also have an impending mileage goal and some new web goodies to roll out soon, but I'll save those for later.