Sunday Jay, Paul, and I did the CRW Climb to the Clouds ride, which goes up Mt. Wachusett and around the Wachusett Reservoir. I last did that ride back in 2003 on my hybrid. 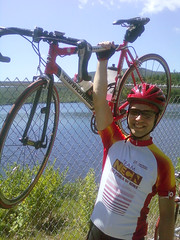 It was my third century of the year, and is part of the rhythm of my prep for this year’s Pan-Mass Challenge. Two weeks ago I extended the Quad Cycles no-drop ride to Harvard into a century. This week (two weeks later) I did CttC. And two weeks from now is the PMC.

You couldn’t have asked for better weather, and Jay and Paul are virtually equally matched with me in terms of riding pace, which really helped. We started an hour late and took a couple extended rest breaks, so we were toward the end of the pack, but we were in no particular hurry.

This year the ride wasn’t allowed within the mountain’s park gate due to damage from last winter’s ice storms, but the ride up Mile Hill Road is actually more challenging than the last bit inside the park, so it was still a major workout: much more difficult than the PMC’s route will be. 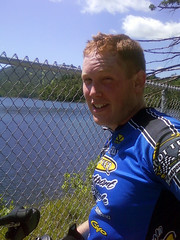 Jay grew up in that area, but has always come up from the opposite direction; doing the climb via the CttC route was something he dreamed he might someday do when he was really in shape. I’m happy to say he made it just fine, and it’s quite an accomplishment for anyone!

I will say that the ride had the same support failures that the CRW has become known for. We went off-track for five miles or so thanks to a missed turn, and we never found at least two of the water stops.

On the positive side, my bike held together, which I consider no small miracle. I’ve had my bike in the shop for most of the past two weeks, and the ridiculous misadventures I’ve had due to the bike shop’s incompetence are fodder for another (lengthier) post. But she held together (with superglue, zip-ties, and strapping tape—no exaggeration) and did an admirable job getting me up and over what is possibly the hilliest ride I’ve ever done.

Next up: more bike shop shenanigans, a leisurely ride with friends around Cape Ann, and my final training rides before this year’s PMC!