Last week, while I was up in Maine, I took the Bike Friday and tried another new route out of Augusta. In short, the route follows Route 27 north through Belgrade, Rome, and New Sharon nearly to Farmington, then back via Route 41 through Vienna and Mt. Vernon, and Route 17 from Kents Hill through Readfield, and Manchester. See the route here.

The only major difficulty was a back road (Kimball Pond Road) I took to go straight from New Sharon to Vienna, which turned out to include six miles of dirt road! Next time I’d suggest taking Route 134 instead.

The route profile was dominated by two peaks that, from a base of 250 feet, rose to around 950 feet. They were both mostly gradual climbs with lengthy descents, although the descent on 27 was roughened by extensive and poorly-done patch jobs, and the second ascent and descent were on that aforementioned dirt road.

After those two, the road home featured a bunch of leg-sapping 200-foot climbs, so I was happy to end the ride at 60 miles.

Aside from the hills, ride highlights included getting held up by a freight train at Readfield Depot, and many scenic views of Flying Pond in Vienna and Minnehonk (!) and Echo Lakes in the scenic village of Mount Vernon. There was even a pond oddly placed at the summit of the ridge on Kimball Pond Road. 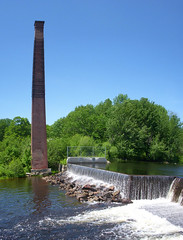 I also passed a bunch of sites that held personal meaning, including my father’s grave, my aunt and uncle’s old house, the old family farm (now razed to make way for a state office building), the YMCA camp where I spent numerous summers and also where my wedding ceremony was held, and the flooded granite quarry in Hallowell where my high school crew used to swim and cliff-dive.

It was fun exploring some area towns that I’d never visited before, and getting a few longer hills in. However, I think if I do this route again, I’ll do it clockwise, so that the hills between Manchester and Vienna can be dealt with before I’ve put 45 miles and 3500 feet of climbing into my legs! And, of course, let’s stick to paved roads next time!