It’s May, so things have started happening.

A week ago Sunday I did the full/long Quad Cycles ride for the first time this year, rather than bailing at Northside (Gammy’s) in Bedford. It only added 10 miles to my day, but it was my first 75-mile day of the year. It being May, I returned home with eyes that were absolutely encrusted with pollen. 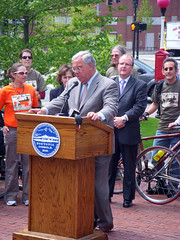 While standing at our lunch stop at Ferns in Carlisle, we ran into Billy Starr, the founder of the Pan-Mass Challenge. We exchanged a few words, and he encouraged us to see if we could flush out any more riders for this year’s event. So if you’re on the fence this year, please sign up. There’s many options as far as length and fundraising commitment, and the classic Sturbridge to Provincetown route is still open!

Last Monday I went to the official Bay State Bike Week kickoff ride and press conference. The ride was a bit silly—just from City Hall to Columbus Park, about as far as you could throw a baseball—but the press conference was a bit interesting.

In the photo at right you get to see Mayor Menino (speaking), Mass Highway Commissioner Luisa Paiewonsky behind his shoulder, next to Boston Bike Program Director and former racer Nicole Freedman, lifelong bike advocate Doug Mink in the back, and MassBike director David Watson at right.

Apparently the Metro newspaper also carried a photo of the event that included me! I haven’t seen it yet (I hope to get a copy), but it must be a prominent and recognizable likeness, because both a former coworker and a fellow Quad Cycles rider both commented on it to me. 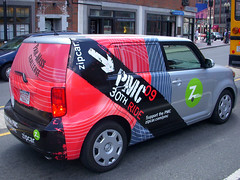 Amazingly, as I biked back from the press conference, I stopped in a line of traffic at a red light at Commercial/Causeway/No Washington. What’s that on my left? A spuddy-van Zipcar all painted up in 2009 Pan-Mass jersey colors! Last year Zipcar Saran-Wrapped a van in PMC colors, and apparently they did so again this year. Quick like bull I whipped out the camera and took the accompanying snap.

Then Wednesday was such a beautiful day that I decided to go even longer, making it my first (100 mile) century ride of the year, something I’m not usually ready for until June or July. And I cranked through it, too, finishing in seven hours clock time, which includes a 30-minute ice cream stop at Kimball’s. I got through it with relatively few complaints, although both my knees and leg muscles required some time to recover. 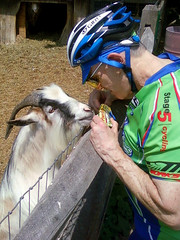 And yesterday I did the Quad ride, which did 62 miles, giving me a day’s total of 77 miles, although I took it very easy after Wednesday’s stressor. The ride featured a return to stopping at Kimball’s for ice cream. Although a group of over 50 riders began the ride, by Kimball’s it was down to four: Bobby, Paul, Michael, and I. Bobby wanted a reprise of his photo feeding Buff the Powerbar-Eating Goat, so I took care of that for him. Another good day in the saddle.

As I indicated, this is also Bay State Bike Week. They have a mileage challenge this year, and I pledged 150 miles and rode 184, between the kickoff “ride”, the solo century, and yesterday’s Quad ride.

And I’ve just completed editing my first video fundraising appeal for my Pan-Mass Challenge ride. It’ll be up and announced shortly, as I kick off this year’s fundraising drive. I hope it goes over well!