Judged against other years, my 2021 cycling season wasn’t bad. It was a refreshing return to a rough approximation of normality after the Covid-19 pandemic mostly cancelled the 2020 season.

Summarized that way, it’s actually a hard year to beat! But I’ve got plenty more to say about it…

A year ago, in the midst of the pandemic and with vaccines just starting to be manufactured, my goals for 2021 were only guesses. However, my predictions were pretty accurate.

I wanted to be comfortable stopping at convenience stores, so I could resume longer rides than I could on a single water bottle. Following my vaccinations in May, I finished a metric century on June 12th (writeup), and many more long rides thereafter.

I also longed to resume attending group rides, and did my first weekly Team Decaf ride on June 1 (writeup). Over the summer I’d join 14 of their 17 rides.

I wanted to return to my normal major events and century rides. However, most organizers shortened or cancelled their events. And after foregoing one century due to rain, I completed my first big event in two years on September 12: the PMTCC Three-State Century (writeup).

After 2½ years, my biggest achievement to chase on Zwift was the game’s top experience level. In April I rode 42 (!) stages of the Tour of Watopia (since it offers double XP) and achieved Level 50 on April 27th, simultaneously setting an all-time fitness record (writeup).

But the cost for riding 860 miles in one month was a case of achilles tendonitis that kept me off the bike for the month of May. Oopsie!

After riding all winter with several Pan-Mass Challenge luminaries on Zwift, I rode a second remote PMC, mimicking the distance and climbing of the traditional route. And happily rode outdoors instead of on the trainer!

Although different from the mass participation rides back in Massachusetts, I still enjoyed it, and raised 60% more for cancer research than last year. After 16 PMCs, my lifetime fundraising for Dana-Farber stands at $119,000! (writeup)

And my PMC fulfilled another of my annual goals:

This was the highlight of my year. I wanted to mark this achievement on a major organized ride, however that wasn’t possible. But even though I rode alone, finishing my lifetime 100th century+ on PMC weekend made it special. Read more toward the bottom of my PMC writeup.

My registration for this 2020 ride – planned as a Herd cycling club gathering – was deferred to 2021, but with travel still inadvisable, I took the 50% refund they offered.

Which was fine; the 2021 Epic Tour was held on the same day as the PMTCC Three-State Century, which I rode instead, marking my first major event in two years.

This year’s fitness charts include a couple significant changes.

First: the static charts you see below are now available on a dynamic Fitness Charts page on my cycling website. They’re automatically updated after every ride to reflect my training throughout the year.

Second: the vertical scale changed on these charts to accommodate my new record fitness. For five years, my CTL (chronic training load) fit onto a vertical axis that ran from 0 to 100, but it now goes to 125, making everything look a little flatter than my previous summaries.

Let’s see what the charts say about my year: 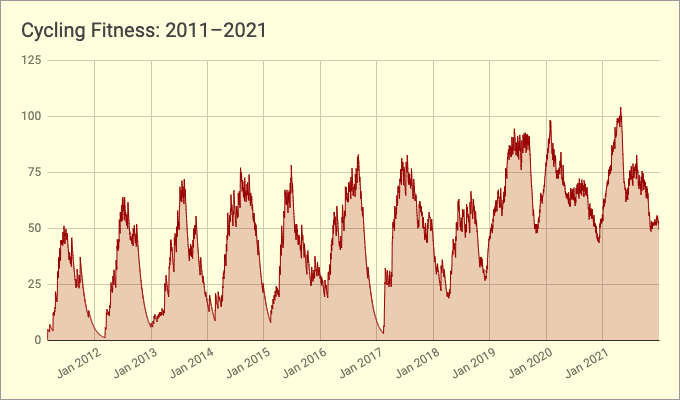 This 11-year view shows that 2021 was incredibly similar to 2020. Let’s break down the similarities.

Both years began with steady winter training, ramping up to an early peak. In both years those were new fitness records.

However, in both years my fitness then fell quite substantially, dropping back to my long-term average at the end of May.

Over the summers, I maintained my level of fitness. My CTL followed a repeating up-and-down sawtooth pattern as I alternately trained hard, then tapered before major events, then completed a big ride, and recovered afterward. That pattern repeats all summer long.

As usual, my fitness tailed off in the autumn and I took time to recharge before another winter of indoor training.

Those are the similarities between 2020 and 2021. Zooming into this year’s chart in detail highlights some of the differences. 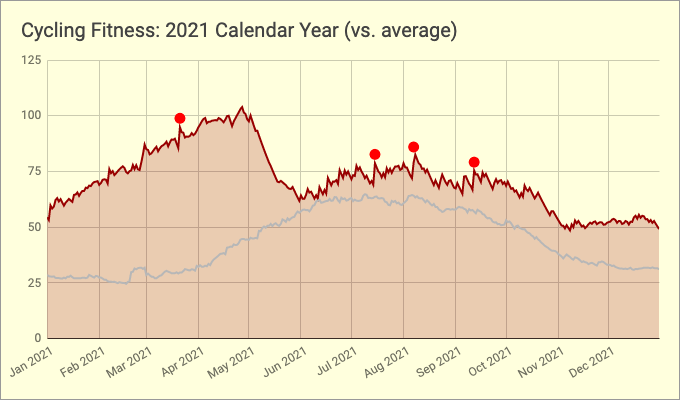 In 2020 I reached max fitness in January, whereas this year I timed my buildup a lot better, not peaking until the end of April.

The bad news: this year I lost as much fitness in the single month of May as I lost over four months in 2020, as tendonitis kept me from riding. That’s how I wound up back at the same point on June 1st.

However, another difference is that my fitness throughout this year was about 5% higher than 2020.

Which brings me back to that new fitness record, with my CTL reaching 103.97. Although it has no specific significance, breaking 100 CTL was a long-anticipated achievement, which only happened after my 860-mile blitz in April to reach Level 50 in Zwift.

But the biggest difference this year was how many centuries I completed. After doing 11 indoor centuries in 2020, this year I only did 4 (but three were outdoors)! So let’s talk about:

There are several reasons why I completed only four rides beyond 100 miles.

After doing 11 of them in 2020, I was sick and tired of indoor centuries, so I only did one of those. Solo centuries didn’t excite me, so I completed my PMC ride, plus one other. And Covid limited me to one major event.

I wasn’t motivated to push myself hard, following an intense two years that included 24 centuries (12 indoor/12 outdoor) and 12,600 total miles. After all that, I needed a relaxed year.

But it could also be… aging. Having another year on the odometer, my tolerance for high-intensity efforts is waning. Of course, I’ll continue fighting it, but I don’t relish the effort, since we know how that story inevitably ends.

Since indoor riding made up half my mileage, I’ll share a couple noteworthy developments on Zwift.

I began the year as a regular on weekly Pan-Mass Challenge group rides on Zwift that were led by Jarrett Collins, the newly-named PMC President. Those were suspended over the summer, but resumed in November.

To everyone’s delight, Jarrett got Zwift to approve an in-game PMC jersey that riders can unlock for their avatars to wear. The design honors the red tee shirts from the first Pan-Mass Challenge, in 1980. It quickly replaced the Zwift “Level 50” jersey I’d previously preferred!

Zwift also released a major new world called Makuri Islands. The fictionalized version of Japan was released in two phases: “Yumezi” features rural Japanese villages and countryside, and “Neokyo” is a neon-lit urban analogue to Tokyo. Both were well-received, but everyone’s holding their breath, hoping that a Mt. Fuji-like climb will materialize.

In the real world, health issues remained top-of-mind. May was torpedoed by achilles tendonitis, heart palpitations, and Covid vaccinations. I also addressed a longstanding irritation by swapping out my saddle (writeup). Seasonal asthma slowed my autumn riding, and aging-related performance declines remain an annoyance.

Another challenge was getting replacement bike parts due to the collapse of the bike industry’s supply chains in the pandemic’s wake, as well as Mavic’s receivership. My LBS jerry-rigged my recalcitrant rear wheel, but I can’t put high power through the pedals due to worn chainrings that I can’t replace.

Finally, in 2021 I gathered a collection of Strava Local Legend awards, which go to whomever has ridden a road segment most frequently. Here’s some of the segments I was named Local Legend on this year:

Despite the bike industry’s disarray, I made several beneficial acquisitions.

Not a purchase, but (as mentioned above) I swapped out my extremely worn saddle for a less-used one off one of my other bikes. It’s not brand new, but don’t tell that to my butt! (writeup)

My biggest purchase was the new GoPro Hero 10 action video camera and accessories. It was too late in the year to produce much, but I have huge hopes for future rides. Tho I did create this 72-second vid:

Also on the topic of optics… Back in 2015, I bought plastic HydroTac stick-on bifocals that adhere to any pair of glasses with water: perfectly functional and cheaper than prescription sunglasses! This year I bought stronger ones and stuck ‘em on my Oakley sunglasses and some clear lenses I bought for night riding.

For evening and nighttime rides, I added a new headlight: a Niterider Lumina OLED 1200. Featuring LED bulbs and lithium batteries, it’s immensely better than my old AA-powered incandescent one. Along with the action cam, this was my best purchase of the year.

Having trouble procuring my preferred Michelin Power Endurance tires, I tried a pair of Continental GP5000s, a new model in a popular line of road tires. I like them a lot, although I miss my Michelins’ red sidewalls.

Also replaced the Shimano SM-BTR1 battery for my Di2 electronic drivetrain. After 8½ years, its original battery had lost capacity, and I needed a replacement, since they’re being discontinued.

I occasionally replace the caps on my Camelbak Podium Ice insulated water bottles due to mold. I bought four replacement lids after learning they were recently redesigned, making them easier to clean.

Finally, I got new ice cube trays. These ones are nicely-sized. I also got these thinking 2” cubes would work inside a hydration pack, but that proved unnecessary once I was vaccinated and could stop at convenience stores to refuel.

That’s 2021… It could have been better, but it was a big improvement over 2020, and there were several memorable highlights. 2021 fulfilled my hopes of getting closer to normality, and leaves us with the promise of an almost normal year as we roll into 2022.