Back in the Saddle Again

A rider only touches his bicycle in five places: two hands, two feet, and the most sensitive place of all: the saddle.

People are very finicky about their saddles – for good reason – and it can be difficult to predict what will work for any given rider. I have been fortunate that the stock saddles that came with my bicycles worked well for my physiology… until recently.

And this may be where we get into what might be too much information for the sensitive reader. Viewer discretion is advised. You have been warned!

Over the past year or so, after long rides – especially centuries – I’ve experienced an abnormal amount chafing around the sit bones. It’s painful, but heals over a couple days. What’s odd is that I’ve never had this problem in the past.

I was slow to look into specific causes or solutions, mostly because it took a while for me to see the pattern, since it only happened on my (comparatively infrequent) longer rides. But when I finally decided that something had to be done, the obvious places to look were my cycling bib shorts and saddle… and my shorts are fine.

But the saddle… As I said, this is the stock saddle that came with the bike. And looking back on it, I’ve put that bike through more than 24,000 outdoor miles, plus another 11,000 miles on the indoor trainer. The saddle still works fine for me, but it does show signs of wear after nine years and 35,000+ miles of use!

Specifically, the saddle’s cover is worn, with the underlying material showing through in places, as you can see in the following two photos. But that shouldn’t have any impact on its functionality, should it? 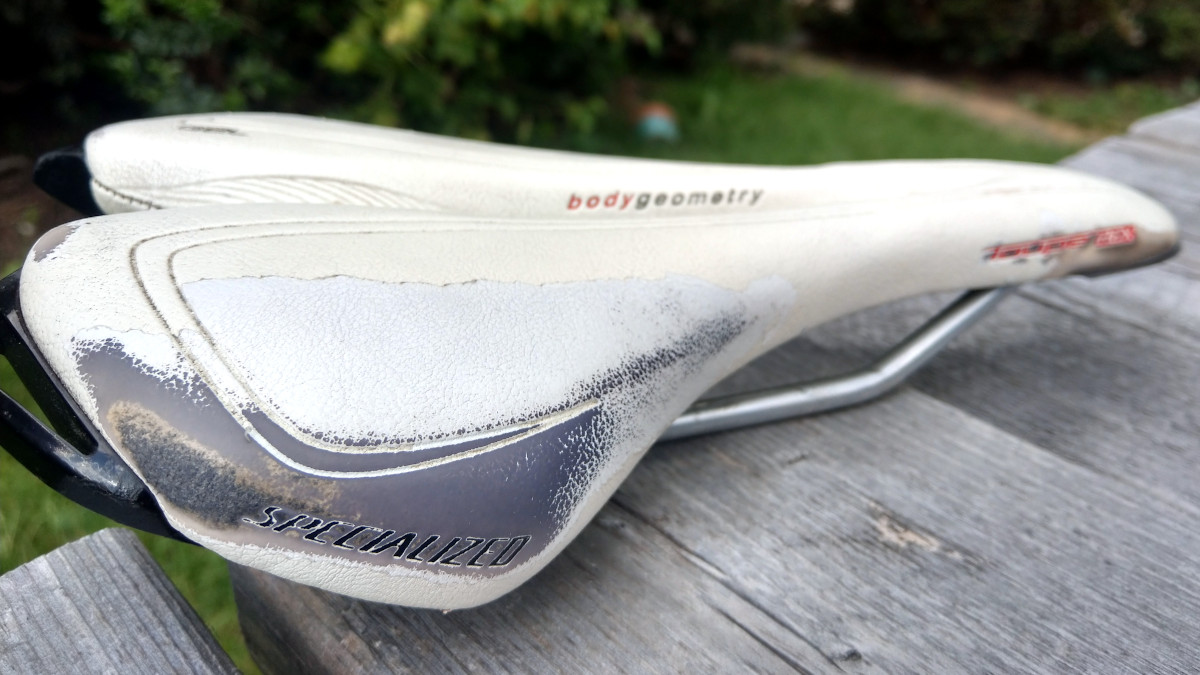 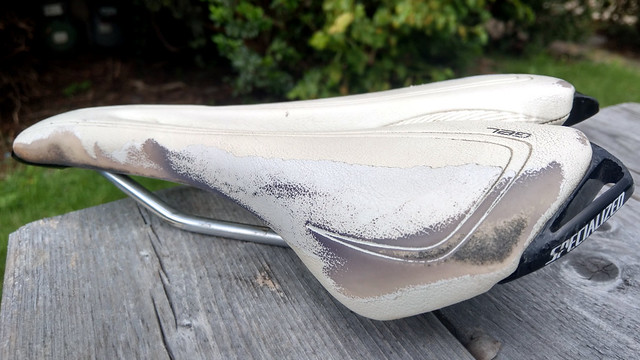 In those photos (as always, click for bigness), there are at least four different layers of saddle material showing.

The outermost layer is glossy, ivory colored, and near the saddle’s centerline. This is the original outer layer of the saddle, and probably is some plasticky protective outer coating. The second, whiter layer is the textured cover material itself, probably leather, that shows through where the clear overcoat has peeled off.

Where I’ve worn through the white leather surface is third layer that probably started as light tan, but turns a dark grey over time. And finally, beneath that are a couple rough, black, patches of hard foam-like material.

The glossy outermost protective layer is quite smooth, but each subsequent layer becomes more tacky and sticky than the last. While Lyrca bike shorts would move and slide easily on the whiter surfaces, they would adhere to the softer, worn dark patches.

And I think that’s where my problem is. While riding, as you pump your legs and move around on the saddle, your bike shorts should stay in one place on your body, but freely slide around on top of the saddle.

Testing this hypothesis was easy, because I have two other (older) bikes with saddles that are in better condition. I could just swap out the saddle and see if the problem went away.

But the timing of this revelation wasn’t great, because it was just before my planned PMTCC 3-State century (ride report), and if there’s one single inviolable canonical rule in cycling, it’s this: never change your equipment just before a major ride. So I rode the century on the old saddle; at least the resulting sores would give me something to judge the replacement saddle’s performance against!

But after the century, I made the swap, and results so far have been promising on rides of 20, 35, and 50 miles.

Kinda weird to think that I’ve actually worn out a saddle!

Of course, the replacement saddle is black, while the old one was white, which matched my handlebar tape. So I’ll have to spend some time trying to procure my preferred saddle in white, which was a rarity even before the Covid-19 pandemic obliterated the bicycle industry’s supply chain. But having a spare saddle lying around has bought me time to make that happen.

Or I could just change to black bar tape. Or red, which would also match by bike frame.

But either way, thanks to how difficult it has become to get bike parts, my steed has started looking like a bit of a Frankenbike.