Everything was set. My fitness had returned following the foot problems that plagued me in May. I’d gotten permission from my better half to take the car. I was all set for my first organized, outdoor century ride since October 2019: the Akron Bicycle Club’s Absolutely Beautiful Century. The only variable left was the weather…

And sadly, the weather steadfastly refused to cooperate, ominous enough to persuade me to skip the two-hour drive into neighboring Ohio. As one of only two or three organized centuries that are taking place this year, I'd been really looking forward to it. Even if it was the right decision — over two inches of rain fell on the route — it was a huge disappointment. 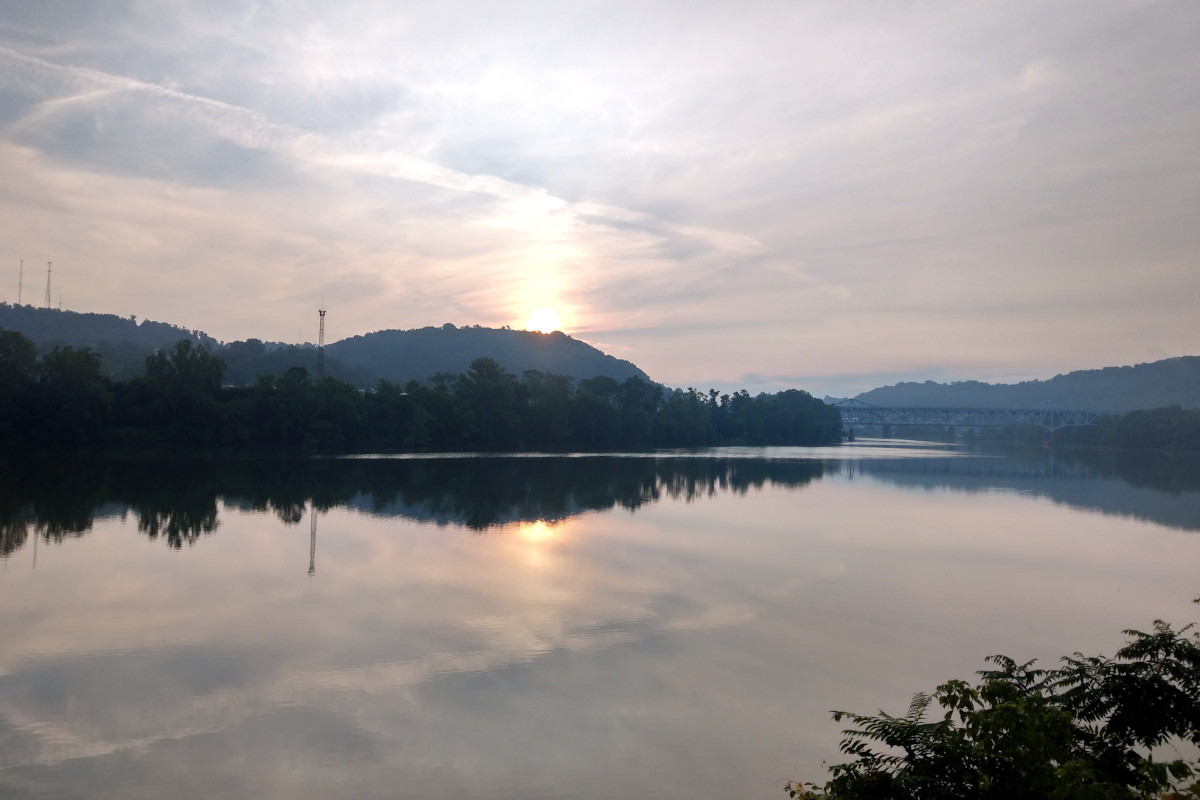 Sunrise on the Monongahela

I was still eager and ready to complete my first outdoor century of the year, so I simply waited a few days. Once better conditions prevailed, Thursday morning I set out on a solo ride up to Butler and back that I’d done two years ago, back in August of 2019.

I climbed out of bed at 4:20am — thanks to summertime’s early sunrise — and took time for a relaxed breakfast. Knowing that it was going to be a sticky and very sweaty day, I braided my annoyingly long Covid hair in order to keep it under control. Then I set out at 6:20am, catching the last portion of sunrise on my way down across the Monongahela and up the Great Allegheny Passage bike path back into town. I appeared to have achieved my goal of beating commuter traffic out of the city.

Over the preceding week, I’d suffered a couple recurring flat tires, so I was extra paranoid about how the bike felt underneath me. And sure enough, nine miles into the ride — just as I was about to come back across the river, my rear tire went soft. Fortunately, I wasn’t far from the Golden Triangle bike rental, and used their presta pump to give me enough tire pressure to make my way back home to effect repairs. I was fortunate to have begun with a short loop near home, rather than immediately heading out of town.

I took half an hour to find the puncture and replace the tube before heading out a second time. And then quickly backtracking to pick up the heart rate monitor strap that I’d forgotten. I was nearly two hours into my century ride, but had only covered 15 miles, and now I’d have to contend with the commuter traffic I’d gotten up so early to avoid. It wasn’t an auspicious start.

I cut straight across town and crossed the Allegheny via the 62nd Street Bridge. The next hour was spent traveling along the river on Freeport Road, which has a fair amount of high-speed traffic, but is blessedly flat: a rarity in Pittsburgh. But as is often the case, I probably went a little too hard trying to match traffic speed, and I would pay for that later.

My route took one of my favorite rides — climbing Days Run and Sun Mine Road almost to Saxonburg, then back down to Harmar via Brewer Road and Little Deer Creek — and extended it a dozen miles, past Saxonburg to Butler. That meant 30 miles of non-stop rolling hills: a sure recipe for exhausting your legs. By the time I pulled into the Sheetz convenience store in Butler at mile 58, I was feeling pretty used up.

It didn’t get any better once I turned around for home. A breeze provided a little cooling, but also slowed my progress even more. I started taking brief roadside rest stops after reaching Culmerville at mile 73, eager for the ride to be over. But another 30 miles lay before me, punctuated by a half-dozen intimidating hills.

Ten miles later I pulled into the Sheetz in Harmar to replenish and rest. From there I could return to town on the nice, flat expanse of Freeport Road, but I needed a little more mileage, and had planned to return by my usual (but much more challenging) route climbing Guys Run and Old Mill, and descending on Squaw Run. Knowing it would be an epic trial, that’s what I set out to do.

From that point onward I was simply in survival mode, just trying to keep the pedals ticking over as the miles crawled by. After another ad hoc rest, I dragged myself over the 62nd Street Bridge, up One Wild Place, and Beechwood, finally limping into our driveway with 104 miles on the clock.

Of note, this was my first outdoor century since the Leelanau Harvest Tour back in September of 2019: just shy of two full years! It was also only my second century of the year, the other being completed on my indoor trainer in Zwift back in March.

Even more significantly, as far as I can tell from my early records, this was my 99th ride of greater than 100 miles since getting back into cycling as an adult back in 2000.

And of course, this was also part of my training up for my remote Pan-Mass Challenge charity ride, which is just three weeks away, and which will comprise my 100th century+ ride.

If you have not already sponsored me, I’d love to count you as one of my sponsors. Please make a donation here.