This was a duplicate of my first ever Zentury, in April 2019: doing a Zwift gran fondo event (100k), then extending that with four laps of (essentially) the Volcano Flat route, finishing at 170km. With this being the final ride in the five-episode Winter 2020-2021 fondo series, I figured it was time to go long. 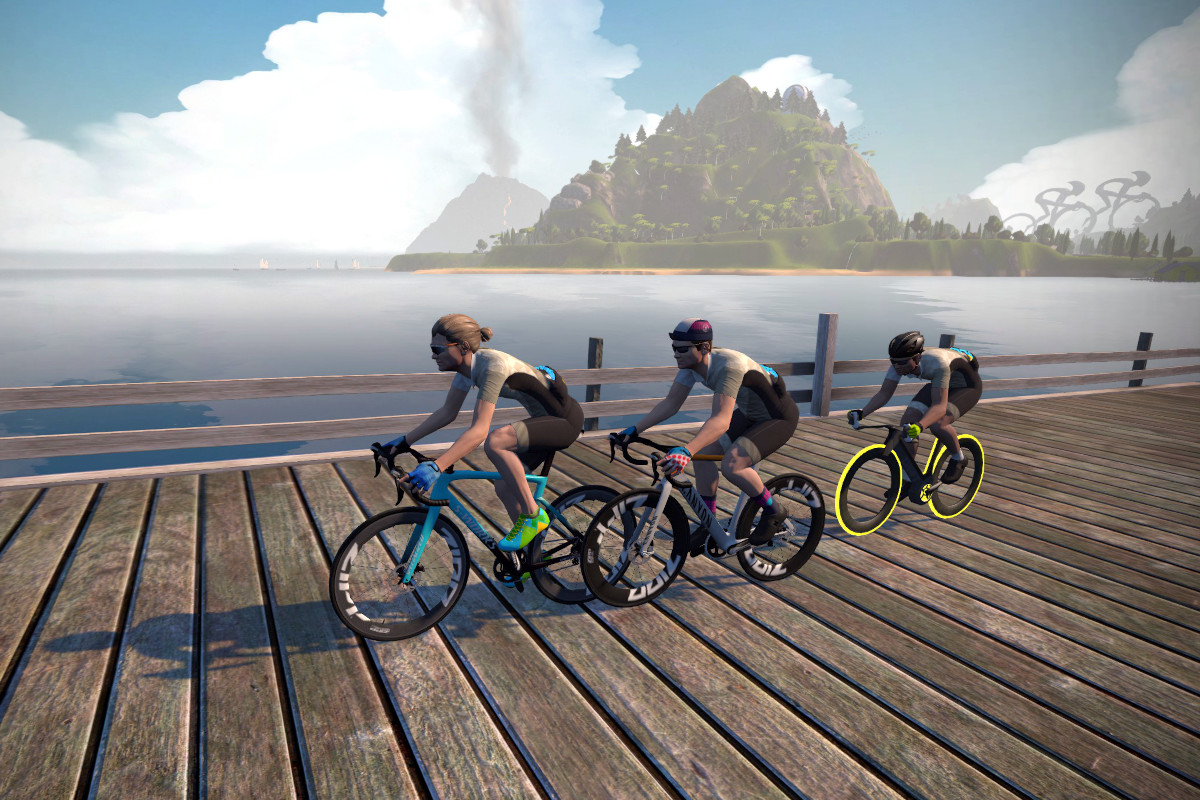 I managed to hang with a couple ad hoc friends for the first 20 miles, but unceremoniously dropped one who didn’t bother switching to a mountain bike for the jungle loop. Then I lost my other friend around Mile 45, when I stopped for a 15-minute stretch and burrito break.

Because this fondo was run in multiple categories and at multiple times over two days, there were only 100 riders in my group, so I was alone on the road much of the time. No one else I knew was on the ride, and the Herd, PMC, Team Kermit, and Western PA Wheelmen Discord audio chats were all empty. That made for a really tedious ride.

Somehow I didn’t realize the obvious: that the first century of the year would be really hard, especially the last 20 miles. I had to stop for another 5-minute rest break, and limped home to the accompaniment of my music collection. It was a really long, hard, solo slog.

Overall I guess I’m happy with it, although I suffered a lot more than I expected. It’s also my 98th century-plus ride, putting me closer to that magical 100th 100+ ride. And the extra 3,450 XP also gives me a big head start on my way to Zwift Level 48 (more on those below).

Now let me segue to an overview of my 2021 training to date.

On the indoor side, it’s been a typical Zwifty winter, with a balance of new features, familiar events, and achievement chasing. In addition to the aforementioned five-ride fondo series, annual events included the 8-stage Tour de Zwift and 3-stage Haute Route. New features included the rollout of “robotic” pace partner rides, acquiring the newly-minted Herd club in-game kit, trying my first individual time trial ride, and the rollout of a couple small but strategic connector roads in Zwift’s imaginary Watopia world. The latter prompted a brief chase to try the four new routes that accompanied the new roads, to reassert my “Route Hero” status. But my focus has been working from Level 43 to 47, ever-closer to Level 50, the current maximum.

Outdoor riding has started slowly. On a couple consecutive days in the 60s, I got two rides totaling 70 miles in, but picked up a tiny staple that flatted my front tire overnight. My biggest problem has been that the pandemic has made parts ridiculously scarce, precisely at a time when I need to replace both my rear wheel and chainrings / crankset. For now I can limp along, but soon I’ll need to address the problem, which probably means swapping out both my wheels and entire drivetrain.

In terms of fitness, it’s been a steady, predictable progression from a CTL around 55 at year-end to 95 following yesterday's Zentury. It’s been a little better paced than last year, when my CTL peaked at 98 in January before tailing off!

Looking forward toward spring and summer, Zwift is running the Tour of Watopia throughout April. With double XP for every ride, you know I’m going to be hitting that hard, which will artificially reduce my outdoor riding. That’ll probably continue to elevate my CTL before I dial it back a bit and enjoy some time outdoors in May, while still putting time into my quest for Level 50 inside.

The prognosis for a summer of outdoor rides is mixed. On one hand, Covid vaccinations have been rolling out quickly, and I hope to get mine before too long. Once vaccinated, I’ll have less fear about stopping to refuel during long rides at convenience stores. Plus most major rides have scheduled dates, with surprisingly few exceptions.

On the other hand, most of those events have dialed back their scale, in terms of length, duration, number of participants, and/or amount of rider support. Some are taking a “Here’s a route map; you’re on your own” approach, some two-day rides are now one-days, and century-plus rides have downsized to piddling 100ks. So it really remains to be seen how many outdoor events — especially organized century rides — I’ll be able to accrue. Still, I’ll hopefully be able to do a few solo centuries, as well as simulated ones back on the trainer.

The remaining big questions are what I’ll do for my hundredth century, and whether I’ll do another “reimagined” Pan-Mass Challenge this year. I should spend some time thinking about those while I’m stuck on the trainer next month, chasing that elusive Level 50 jersey...