What a year it was... or wasn’t, actually. What can I say about the 2020 cycling experience?

Having begun the year with lots of indoor training, in January I achieved a new all-time record level of fitness.

But it was all downhill from there. Before the spring outdoor season began, the outbreak of the worldwide Covid-19 pandemic caused the cancellation of all group rides and every major event on the calendar. On top of that, I kept my solo rides short to avoid risky convenience store replenishment stops. In terms of outdoor riding, 2020 was a complete and utter write-off, as I logged a 20-year low 1,140 outdoor miles.

In contrast, my investment (back in 2018) in a new smart trainer and the Zwift indoor training platform proved prescient and timely. Over 80 percent of my 2020 cycling happened indoors, as I rode simulated versions of all my usual summer events. I even completed my 15th Pan-Mass Challenge (virtually) when this year’s real-world ride was called off. Needless to say, my 4,903 miles on the trainer was a new record.

Combining indoor and outdoor riding gave me an annual total of 6,043 miles in the saddle, only 513 miles less than I rode in 2019. I consider that quite respectable, given the extraordinary circumstances.

After a superlative 2019, I didn’t have a ton of specific goals coming into the 2020 season, which was a good thing, because I never would have lived up to them! But I did have some general expectations. Let’s see how each of those turned out...

The Covid-19 lockdown put an early end to any pretense that 2020 would be a good — or even normal — year. I didn’t do any major events or even a single group ride all year, and only one outdoor ride that was over 40 miles.

The only way I surpassed 2019 was in time spent on the indoor trainer, completing eleven Zenturies (indoor rides over 100 miles). But that’s not how I’d envision a successful year.

I’m not going to enumerate all this year’s Zwift achievements, but there are a handful worth calling out. I completed every one of Zwift’s many routes in January, along the way earning the “Masochist” badge for completing my 25th Alpe du Zwift ascent. But to retain that “route hero” status, I had to subsequently complete two more sets of routes when Zwift released expansions for Paris/France and Watopia. I also took three series of FTP tests, registering 215/215/196W in the 20-minute tests; unlocked the new in-game version of the Herd team jersey; and I ended the year at experience level 44 (out of 50).

I also wrote a useful program for myself to automatically open a full-screen display of any “photos” I took while in-game. That way I didn’t have to wait until the end of the ride to see how they came out, nor did I have to fiddle with the laptop to open them myself.

The Herd’s Epic Tour in Toronto

Another big disappointment was the cancellation of a planned September trip to Canada to do a (nominally) epic ride and meet up with online friends from the Zwifting club The Herd. I never even received the (personalized!) ride jersey I ordered.

As always, my two fitness charts really put the year’s efforts into perspective. 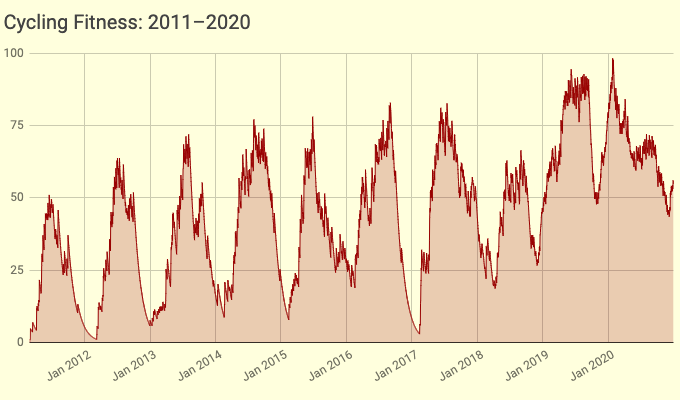 This chart shows my fitness trend over the past ten years, with peaks in the summer and troughs in the winter. Looking at 2020 in this context, the major themes I’d like to call out are:

If we set aside comparisons to 2019, I had a surprisingly good year from a fitness standpoint; despite the pandemic, it doesn’t look grossly different from any normal year. And looking forward, I’m in a decent position to make the most of whatever 2021 offers. 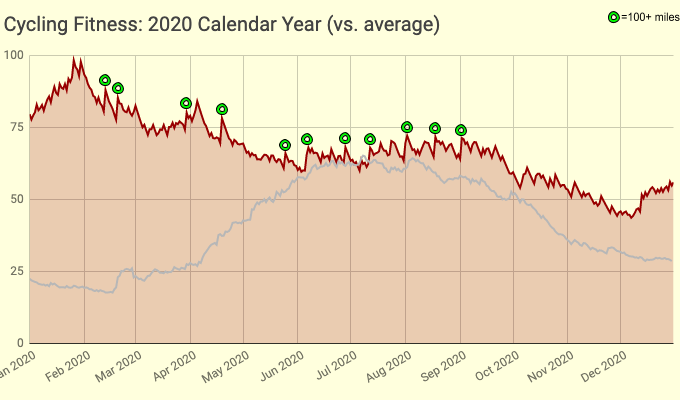 This second chart shows my 2020 fitness in detail, including my eleven Zentury rides (the green circles).

Note my record fitness peak in January, and how much fitter I was than my long-term average (the grey line) all spring long. Despite that, I did gradually lose fitness through the spring, with it slowly falling to match my long-term average at the start of summer in late June.

Similar to most normal years, my summer featured a familiar shark-tooth pattern that comes from periods of alternating rest and recovery with big hundred-mile rides… It’s just that they all took place indoors this year, rather than outside.

A late September interruption caused my fitness to start falling off, when both my heart rate monitor and the laptop computer I ran Zwift on failed and needed to be replaced. At that point, I reconsidered my goals, and decided to abort my last two century ride simulations and start my off-season a little early. Taking some time to relax, my fitness gradually fell to an annual low of 43.53 on December 7th before I started ramping back up again. Looking forward hopefully toward 2021, I finished the year well ahead of my typical level of fitness.

For the first time since 2001, I didn’t do a single century ride.

But I did complete eleven indoor Zwift centuries, or “Zenturies”, simulating both the distance and amount of climbing found in my usual real-world rides.

How did I simulate them? I created a web page called The Zenturizer where I could input my preferred distance and climbing, and the site would determine the courses on Zwift that most closely matched my desired profile. It was a very handy time-saving tool, which anyone can use!

I had targeted thirteen Zenturies for 2020, but after completing eleven, I took a three-week break to replace both my heart rate monitor and my laptop. At that point I decided to end my season early and save those two extra centuries for springtime. More about that when I get to my 2021 goals!

Here’s the list of the eleven that I did complete:

After five years away from the event, reconnecting with the Pan-Mass Challenge was my biggest unexpected pleasure of the year. I was the first person to join the PMC club on Strava; I participated in prototype PMC meetups on Zwift that led to an official weekly series of PMC virtual group rides; I registered as a virtual PMC rider for the first time; and I simulated the entire two-day, 192-mile route indoors on PMC weekend. Along the way, I made a bunch of new friends, did a lot of reminiscing, earned my 15th PMC rider’s jersey, and added $3,000 to my lifetime fundraising for the Dana-Farber Cancer Institute, which now stands at $114,222. Here’s my full PMC ride report.

Although the year featured many other memorable Zwift rides, one of the unique ones was participating in a 2,000-person ride led by Watanabe Wataru, the mangaka who created Yowamushi Pedal, an extremely popular cycling manga and anime series.

I should also add that in October I marked the 20th anniversary of purchasing the Cycles Devinci hybrid that started me on the path to becoming a PMC rider and serious cyclist. It’s been a good — but extremely long — road!

This wasn’t a great year for pimping my ride, but a few items do stand out as worth mentioning:

It wasn’t the best year for blogging — how much can you write of interest about indoor rides? — but I still managed to get 16 stories written. Here‘s the full list:

Even after writing off the entire 2020 season, Covid-19 shows no signs of abating anytime soon, so I still have no idea what 2021 will look like. But everyone’s top goal for next year is obvious:

How about a return to normality? Being able to ride farther outdoors than I can manage on a single water bottle? Participating in group rides with other cyclists? Or even do some centuries and my typical big events? Right now, that sounds pretty aspirational and more than adequate.

As far as I can tell from my sketchy records from 2000-2005, I’m currently sitting on a lifetime total of 97 rides of 100 miles or greater. I’ll probably get in shape with a couple indoor Zenturies in the spring, then find some way to do a special 100th century outdoors. It’s probably the biggest thing I’m anticipating and a milestone well worth celebrating. Planning out a route will be a good wintertime activity...

In about 3,575 trainer miles — which is currently estimated to happen around August 13 — I will hit Zwift’s highest XP level. There’s a nontrivial possibility that they’ll soon add more levels beyond 50, but that won’t dilute my satisfaction at reaching what’s currently the top of the chart.

At this time, I have no idea whether 2021 will see me doing another virtual Pan-Mass Challenge or not, especially since my fundraising mojo has atrophied. But that’s another decision I’ll make as the season begins to take shape.

It’s the same story for this ride. Since they deferred my paid 2020 registration until 2021, I’d certainly like to take advantage of the opportunity to ride, but whether it’ll happen or not remains unknowable.

And that’s all I’ve got to say about this pandemic-canceled 2020 season. As of the start of the new year, things are still looking quite iffy. But as the calendar turns over to 2021, I’m hopeful that some signs of normality will begin to appear in the coming months.

Hopefully I’ll see you out there!