I was so proud when I completed all 25 of Zwift’s course achievements that I wrote about it in a December 1st blogpost.

Six days later, Zwift decided to add 42 new course badges, including ones for all their most difficult routes. Sigh.

I guess the upside of having 42 new carrots to chase was that completing them gave me enough Experience Point bonuses to rise from Level 29 to 33 over the course of December and January.

And all that riding helped me reach a new all-time record level of fitness, as measured by a Chronic Training Load score of 98.18… in January!

By February 1st, I'd earned 65 course badges, with only the two hardest routes left to do: the hellaciously hilly “Über Pretzel”, and the tedious and repetitive 11-lap “PRL Full”.

Both of those wound up being “Zenturies”: indoor Zwift rides of more than 100 miles. Since I post about each ride that surpasses that distance, here’s a little about how they went.

The Über Pretzel is beastly. It finishes at the summit of the Alpe du Zwift, an accurate copy of the real-world Alpe d’Huez. But when you hit the Alpe you’ve already got 72 miles in your legs and 4,200 feet of climbing, including the Radio Tower: the steepest climb in Zwift. And yes, I only have an 11-28 cassette and always ride with the trainer incline realism set to 100%. 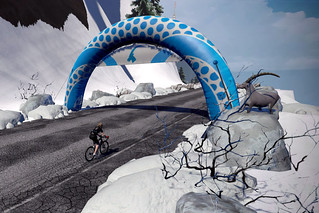 Although the route finishes at the Alpe summit, there’s no reason not to coast down the descent to earn more effort-free XP. And once you reach the bottom at Mile 88, why not ride the extra 12 miles to complete a full imperial century?

I rode the Über Pretzel on Thu Feb 13. It was sheer, unadulterated torture, taking 6h52m and leaving my legs and knees shattered. The upside: I reached Level 34 and got halfway to Level 35, and completed my 17th Alpe (you get the “Masochist” badge after 25 ascents). Plus you never have to ride that brutal route ever again!

The PRL Full is Zwift’s longest and only imperial century route. It’s a stupefying eleven and a half laps of their “London Loop”, which includes a (comparatively) gentle ascent up the Box Hill climb. But after eleven laps, you’ve actually done more climbing than the Über Pretzel, albeit spread out more evenly. I undertook the PRL Full on Feb 20, a week after the Über Pretzel with a couple easy recovery rides in-between.

It started very inauspiciously. First, I forgot to consult when London was on Zwift’s calendar, so I had to use the World Hack to get in. That in turn meant an empty course, with no one to draft. Considered running a TT bike instead of my usual climbing bike, but didn’t want the climbing penalty, so opted for the Tron Bike: a rare instance where I’d consider using it. Then, about ¾ through my first lap (after my first ascent of Box Hill), I was sent off course by the “repositioning the camera with a turn coming up” bug, and rather than turn around, ride 100 miles hoping Zwift would still recognize the route, I simply quit and started over. 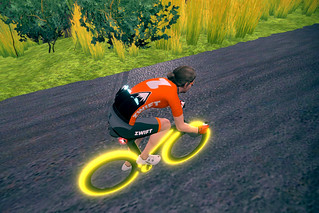 After that, it was just plod on, for another eleven ascents of Box Hill. Combined, the two rides took 7h45m for 116 miles. But with so few riders on course, half the ride I had the special “fastest lap” jersey, and I had both that and the KoM jersey another 25% of the time: a cheap victory, but rewarding. Along the way I also earned the Italy Challenge’s Pinerallo F8 bike.

In completing the PRL Full, I had done Zwift’s longest route, finished my second “Zentury” in two weeks, and finally completed all 67 of Zwift’s badge-earning courses: an arduous and challenging achievement. And the XP bonus bumped me up to Level 35, which means I can buy the fast Zipp 808 & rear disc wheelset.

In the larger scheme of things, I’ve done my first two centuries of the year already, but have no more in-game carrots to chase. That’s okay for now—I could use a few days’ rest!—but it puts me in the strange position of peaking in January/February, with months before the road season begins! What to do? Mind you, I’m NOT asking Zwift to add more course badges... I’ve had enough of that, thank you!

My only remaining carrot is the Masochist badge, which requires eight more trips up the Alpe du Zwift. Not very fun, and not something I will achieve before outdoor rides relegate the trainer to the closet. But I guess it couldn’t hurt to knock out a couple more ascents before then...

But first, some incredibly well-earned rest and recovery.