In contrast with a miserable 2018, 2019 was a complete renewal: possibly my best remaining year on the bike, and arguably the best of my entire lifetime.

While it lacked crowning moments like the Pan-Mass Challenge or the Dirty Dozen, I set dramatic new high water marks for miles ridden, century rides completed, and level of fitness.

Beyond the numbers, though, was how easy it felt. After my first winter using a smart trainer and Zwift, I began the season already near peak form. It was such a different feeling, without the usual early-season suffering to build fitness, and I went into every major event strong, confident, and at ease.

It made setting and chasing my cycling goals an unblemished pleasure, making 2019 a complete reversal of my disappointment in 2018. It was an absolutely stellar year!

Let’s review my 2019 season goals. A year ago, I set three secondary and three primary ones.

My secondary goals laid the groundwork for achieving my primary goals.

“My secondary goals for 2019: spending the winter riding Zwift on the trainer, allowing me to enter the road season at a high level of fitness, and monitoring that by performing regular FTP tests throughout the year.”

Spending the winter riding Zwift on the trainer

I really enjoyed Zwift, as described in my summary blogpost. The virtual world was entertaining, the smart trainer changing resistance to simulate climbing kept it interesting, and the social interaction through Discord audio chat was engaging. From December through the spring, I tallied an unprecedented 2,600 simulated miles on the trainer.

I monitored my training using my usual fitness charts, which you’ll see shortly. I made steady progress throughout the winter, but would it improve my outdoor riding?

The big test of Zwift’s effectiveness came on April 14th, when one of my first outdoor rides of the year was a 125-mile 200k brevet. It went fabulously, as described in my blogpost.

Since my indoor trainer includes a power meter, I can gauge my fitness with a new metric: functional threshold power (FTP). I took two different FTP tests every three months to monitor and quantify my progress, plus automatic FTP increases detected by Zwift while riding. Depending on how you measure it, my FTP varied from 197 to 234 watts, averaging 215W.

That set me up for success reaching my main goals for the year.

“My primary goals for next year are simply this: to finally get beyond the malaise of 2018, to ride more, and get back to peak fitness this summer.”

Get beyond the malaise of 2018

Although the turnaround started with my new indoor trainer and Zwift membership, several other factors helped rekindle my desire to ride. Bypassing the usual springtime pain of riding my way into fitness certainly helped. I also lost less time to traveling. And after suffering through 2018 being the rainiest year in Pittsburgh’s history, all of this year’s major rides had gorgeous conditions (despite 2019 being our third wettest year ever). And by staying on top of my fitness and fatigue levels, I avoided overtraining, which can also sap motivation.

But that’s only 52% of the story... The other 48% are the virtual miles I put in on the trainer. In my first full calendar year on Zwift, I logged an additional 3,182 indoor miles.

My combined total was 6,582 miles, which constitutes an all-time record for me. Ride more? Double check!

Get back to peak fitness

All that indoor and outdoor riding ensured that I got back to peak fitness. I was in the best form of my life, which I’ll quantify in the two charts in the following section.

These charts provide the next level of detail about my year, plotting my Chronic Training Load (CTL), which is a measurement of cycling fitness. The charts really tell the story for 2019.

Before addressing 2019 in detail, it’s worth looking at my fitness over the past nine years, which allows me to visually compare 2019 to previous seasons. At a high level, four major themes jump out of this chart:

A little further back, my previous all-time max fitness levels occurred briefly in 2016 and 2017 around 82.5 (follow the horizontal grey line on the chart). In 2019 I spent more than four months above that level!

In other words, it was a record-smashing year. Now let’s zoom in and take a closer look at 2019. 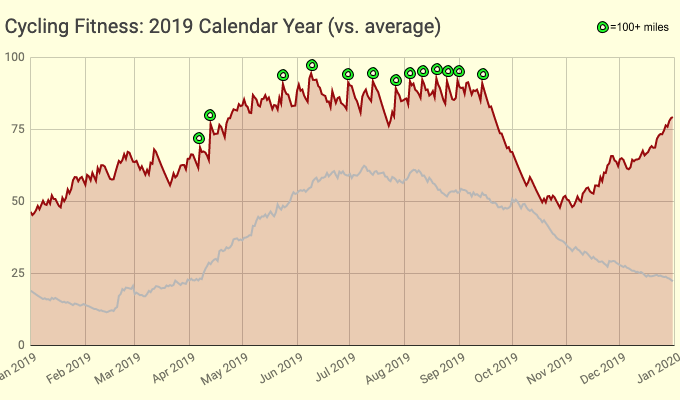 First, note that grey line inside the chart. That’s my average fitness level from 2011-2018. Thanks to my winter training, I entered 2019 way above my usual fitness, and surpassed my typical midsummer peak form by the middle of February! And my fitness remained above average over the entire year.

Another big difference from last year is my consistency. In 2018, I couldn’t ride regularly, so its chart had lots of ups and downs. This year was steadier, only showing brief dips (for travel) in March and July, followed by that big dip in October, when travel, an achilles injury, and a cold kept me off the bike. I hopped back onto Zwift in November to build fitness for the 2020 season.

These two charts document a ton of hard riding; I could stare at them all day long.

And those green circles on the chart? Those represent my 100-plus-mile rides. That’s the next level of detail to talk about…

When asked what kind of cyclist I am, I say I’m a centurion. The most important and memorable target events of my year are centuries (100 miles) and 200ks (125 miles).

This year I demolished my previous mark (nine), logging no less than a record-shattering thirteen centuries over just six months! Two of those were longer 200ks, and one was my first-ever virtual century on an indoor trainer.

With seven of them crammed into an eight-week period in July and August, I relied on a well-planned, repeating pattern of: train, taper, ride your event, recover, and repeat.

My biggest disappointment of the year was that I missed Pittsburgh’s arduous Every Neighborhood Ride while doing another ride I’d already committed to.

Here’s my full list of centuries with comments and links to ride reports. Or you could watch my late-season summary video.

One major development was my ability to train with a power meter, which allowed me—for the first time—to track my functional threshold power (FTP) and my power curve, which in turn helped me figure out my cycling “phenotype” as described in this blogpost. I also picked up and made good use of the defining treatise on the discipline: Allen & Coggan’s book “Training + Racing With a Power Meter”.

The biggest setback of the year was my late-August achilles injury, due to a combination of overuse and over-stretching. Although I completed three centuries while injured, it wouldn’t heal without time off the bike, which brought my season to an abrupt end. I’d hoped to do more easy autumnal riding, but there was very little of that.

I’ve already alluded to this year’s weather, which was simply amazing.

One fun tech project was creating the AlpenTimer, a Javascript webapp that helps you monitor and predict your pace up the Alpe du Zwift climb in order to earn the sub-60 minute achievement, break your own personal record, or just track your historical performance.

An artsy project was cutting hand-shapes out of Coroplast and spray-painting them cyan to mimic the blue “Ride On!” thumbs-up symbol that appears in Zwift’s virtual world. I hung a large one from the ceiling of my “pain cave”, and made a bunch of small ones for my jersey pockets.

One final disappointment was BikePGH’s Tag-o-Rama cycling/photography game. Regular participant Yale Cohen started harassing other players, driving many of them away. I don’t tolerate online abuse, so despite picking up 25 tags in 2018, I also quit Tag-o-Rama this spring.

In the past, many of my “Additional Highlights” were things I bought, so I’ve carved out a new section to specifically highlight my new toys.

I ordered three new cycling jerseys, each of which comes with a unique story. I’m eager to show them off, but I'm still awaiting delivery of the last one, so I won’t say any more until an upcoming blogpost.

In terms of the bike, I got a Cygolite Hotshot 150 taillight, which crapped out after its first wet ride. I finally tested some Continental GP4000 tires I’ve had lying around; they were okay, but now I have to try their new GP5000s to see if they’re any improvement over my usual Michelin Power Endurance rubber.

I updated my Garmin bike computer with two new apps. I’m using Heart Rate Stress Score to replace Strava’s “suffer score” app, which became worthless when they changed its calculation. And I tried Multi-Page Race Notes for handy course notes, but fell back to old-school white electrical tape on my top tube.

The only noteworthy purchase that didn’t go on me or my bike was the aforementioned Allen & Coggan book “Training + Racing With a Power Meter”.

And one final item before I look forward to 2020... It was a busy year here on ornoth-cycling.livejournal.com, with 24 ride reports and blogposts. Here’s the full list:

I don’t really expect to surpass my 2019 season, due to this year's confluence of circumstances. Will 2020 also feature great weather, limited travel, no job commitment, and an understanding partner who will loan me her car to get to distant rides? And can I continue to evade the growing concerns of age and health?

I’ll certainly continue Zwifting through the early season in order to hit the ground running once temperatures start to warm again. And I’m starting the new year at an even higher fitness level than 2019!

I’ll mostly target the same events I do every year, but there’s one known wrinkle in next year’s schedule. Instead of repeating the Leelanau Harvest Tour, next year’s Herd gathering will be outside Toronto, at the Epic Tour. That’s geographically convenient, and their 180km route will be the perfect distance for a September ride.

Other than that, 2020 will probably look an awful lot like 2019, and I have no problem with that whatsoever, since 2019 was one of my best years on the bike.