My Chariot of Fire

Cyclists come in many flavors: roadies, commuters, mountain bikers, racers. Then within the ranks of roadies, you have sprinters, climbers, all-rounders, endurance riders, and more.

It might sound odd then that after such a long time—exactly 1,000 weeks, in fact—I still struggle to find where I fit in that spectrum. 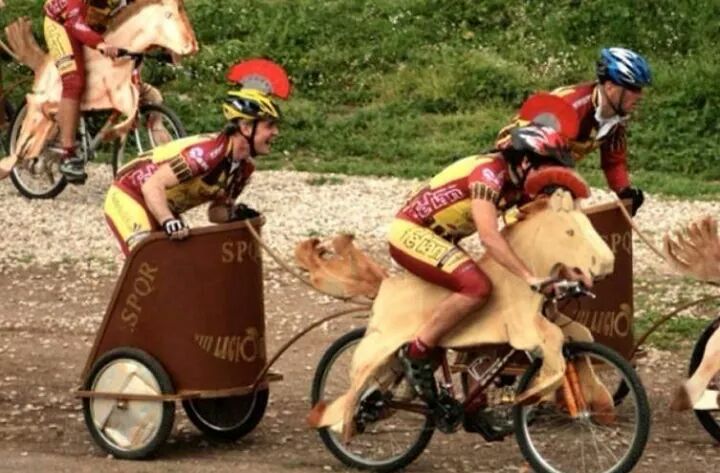 It’s obvious I’m not a sprinter. My top-end power is perfectly described by the term “pedestrian”.

Does that mean I’m a climber: a grimpeur, as they say? Not if you judge by my build, or my performance in the Dirty Dozen! True climbers are much lighter than my (reasonably scrawny) 77kg, and usually much shorter, too. My best strategy for becoming a climber involves losing 6kg of weight and nine inches of height by cutting my head off at the neck.

But I do drop people on short, steep climbs. Perhaps that makes me a puncheur. Tho to be honest, rolling hills wear me out and leave me more exhausted than any other kind of terrain.

I might be a rouleur, an all-rounder: another word for someone who sucks equally at all elements of the sport. Not exactly a flattering image to have of oneself.

Fifteen years ago, I considered going down the very, very, VERY long road to becoming a randonneur: a long-distance rider. I enjoy spending a day in the saddle as much as anyone, but for a randonneur, 125 miles is the shortest ride they’ll do. Their normal rides run 250, 375, or 750 miles at a time, and sanity (at least my sanity) has its limits!

I define an endurance ride—and the type of ride I enjoy—as 100 to 125 miles (200km). The ride that matters to me most is the 100-mile imperial century. That’s what I do, what I enjoy, and how I judge my success. So if I were to give myself a label, it would have to reflect that.

That’s where things have stood for the past twenty years: no real resolution, and no real identity. But last week I was thinking… If the sport didn’t provide me with a category, maybe I should come up with one myself. What word would convey the idea of a person with an affinity for centuries?

Once I thought about it, the answer was pretty obvious: a centurion!

By leveraging the common term for a 100-mile ride, it’s instantly recognizable among cyclists, denoting a long-distance cyclist while removing the ambiguity associated with “endurance riding".

It also has the positive connotations of a warrior—strength, experience, self-discipline, and leadership—which translate equally well to cycling.

So if you ask me what kind of rider I am, I can finally answer you: I’m a centurion!