Until five months ago, I didn’t have a power meter, so training with power just wasn’t possible. Even today, I don’t have a power meter on the bike—just on the indoor trainer—but that’s enough to start drawing inferences from the power data I’ve generated over the winter.

One analytical tool for interpreting a cyclist’s power data is their Power Curve. Thankfully, it’s conceptually simple and easy to explain: it looks at your power data and plots your maximum power output (in watts) over every duration, from one second to an hour or more.

All riders can sustain maximum power for very short intervals (think finish-line sprints), but lower power at durations of one to five minutes, and less still for sustained efforts of 30 to 60 minutes or more.

That means the Power Curve looks similar for all riders: starting high, sloping sharply downward, then tailing off gradually. Plot a novice rider and a professional cyclist on the same chart, and there wouldn’t be much difference in the shape their lines, other than the pro’s being shifted higher due to their higher power output.

For insight into how it might be useful, let’s look at my current Power Curve (click for full-size):

Those estimates all hold whether I’m trying to figure out how much power I could hold for a specific time, or how long I might be able to sustain a specific power output.

That’s great information for planning a workout or figuring out how to pace yourself on a max-effort ride; however, it doesn’t tell you anything about my individual strengths and weaknesses or how I compare to other cyclists. To do that, we need to introduce comparative data, which is provided by additional research.

Through empirical testing, a team of researchers—including the well-regarded physiologist Andrew Coggan—calculated expected athletic performance ranges for power output at durations of 5 seconds, 1 minute, 5 minutes, and an hour. Comparing an athlete’s Power Curve against those calculated norms yields an understanding of an individual rider’s strengths and weaknesses.

The research team took riders with similar strengths and weaknesses and aggregated them into commonly-recognizable categories which in true scientific fashion they gave the officious label “phenotypes”. An athlete who excelled at short efforts was a sprinter; whereas someone producing above average power over an hour would be a good time trialist, climber, or steady-state endurance rider; and someone with equal performance across the entire time spectrum would be an all-rounder.

So what can I learn about myself from my own chart? 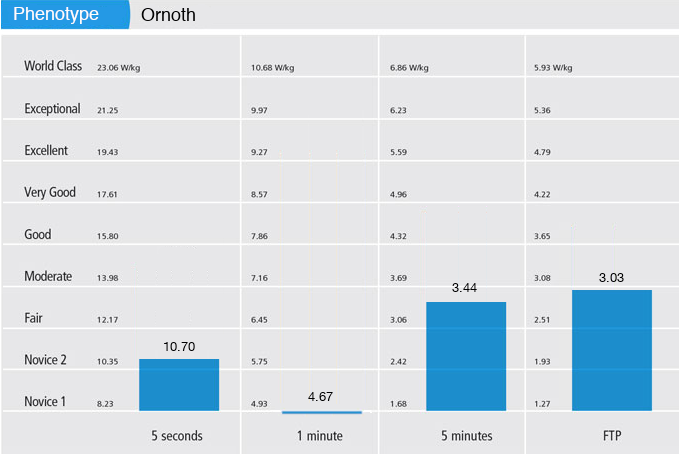 The obvious first conclusion is that I’m no professional athlete! My 5-second sprint is pretty pedestrian, and my 1-minute power doesn’t even register on the chart! However, my 5-minute power is in the upper half of the “Fair” range, and over 60 minutes I’m a fraction below “Moderate”. In comparison with professional athletes, that’s pretty impressive for a 55 year-old!

The chart shows that although I might lose a two-up sprint with a corpse, I will have unequivocally stronger results the longer an event goes. That marks me as a time trialist, climber, and/or endurance rider: something that shouldn’t surprise anyone who knows anything about my riding style and history. But it’s nice to have that confirmed by quantitative data.

For any athlete who is given this data, the next question is what to do with it; and the answer is a resounding “Do whatever you want.” Do you want to work on strengthening those areas where you are weakest, to improve your overall performance? Or do you want to maximize your strengths to derive the most benefit from them? That’s entirely up to you.

Since my cycling goals are mostly limited to centuries and 200ks, I’m perfectly happy continuing to work my endurance, and living in Western Pennsylvania is guaranteed to build up my power over short, steep climbs.

Armed with this new understanding of the wattages I can sustain over specific durations, I could put a power meter on my bike to get live power readings, which would allow me to perfectly gauge and pace my efforts in real-time. That expense will probably have to wait until the next bike, tho.